How much more evidence to we need? See todays IPCC report


For those people who still believe that we should allow Staverton Airport to expand and still do not believe in global warming, I refer them to quotes from the IPCC update report that was issued today, (17th November) which is the peer reviewed analysis of 2,500 of the world's top climate scientists:

“Eleven of the last twelve years (1995-2006) rank among the twelve warmest years in the instrumental record of global surface temperature (since 1850).”

“Of the more than 29,000 observational data series, from 75 studies, that show significant change in many physical and biological systems, more than 89% are consistent with the direction of change expected as a response to warming.”

“Carbon dioxide (CO2) is the most important anthropogenic green house gas. Its annual emissions grew by about 80% between 1970 and 2004.”

“Continued green house gas emissions at or above current rates would cause further warming and induce many changes in the global climate system during the 21st century that would very likely be larger than those observed during the 20th century," (potentially up to an unimaginable 6 deg C increase)”

“Anthropogenic warming and sea level rise would continue for centuries due to the timescales associated with climate processes and feedbacks, even if green house gas concentrations were to be stabilised.”

How much more evidence is needed to convince people that we cannot expand Staverton or any other airport? In fact, we simply cannot allow flying and many other activities we take for granted today if we want the planet to have any future.
Posted by Kevin Lister at 2:12 PM No comments:

Email to Councillor Garnham - he is extremely offended by climate change

Thank you for your email (see at the end of this text). You may want to explain which part of the letter actually offends you. I can only speculate.

Is it because I refer to the conclusions of the IPCC report that forecasts with the business as usual scenario that we are pursuing, we could be facing a temperature increase of 6 deg C by the end of this century, which will lead to the extincition of virtually all life on this planet. I can understand you being offended at this, it makes us all feel guilty about the carbon emissions that the we produce and our complicity in the end of the world.

Is it because I compare the situation with the lead up to the second world war? Again I can understand you being offended by this, because it raises the famous question as to whether or not countries go to war because the populations are evil or because they are led by evil. Gloucestershire airport claims that the majority of people support them. If this is correct, it does not prove that there is a case for the airport, just in the same way as popular support for war in Germany before WW1 and WW2 did not prove war was correct. In our case, it merely proves that the majority of people are either unaware of climate change or so self interested as to not care. I can understand discussion of this being offensive to you.

Is it because I highlight the cancer risk associated with living near an airport? Heathrow has some of the highest incidents of respiratory illness, heart disease and cancers in the country. I can understand people who are keen on flying being offended by the thought of killing the people on the ground around them.

Is it because I highlight the absurdity of a company hoping to provide a helicopter taxi service in the face of cataclysmic climate change, and to be operating from an airport that once said on its web site that it was concerned about the global warming? Again, I can understand you being offended by the knowledge that a company which the Council owns, behaves in such an appalling manner.

There are probably many other things in my letter that could have led me to offend you. However, I suffer huge offence every time I switch on the TV and hear of the latest Airbus delivery, or the latest airport expansion, or the latest bio-fuel development that is destroying the rain forest, knowing full well that each one of these is another nail in the coffin for my children. I however, am not in elected office, you are, and while you have any say or influence in a decision that will affect my children I will continue to use my democratic right to raise my concern in every way I can. I will, therefore not be removing you from my mail list unless you make it absolutely and unequivocally clear that you will oppose the airport expansion and use your influence to persuade other councillors into doing the same.

I would also ask you to recognise the magnitude of the imminient crisis that we face. Your party recently backed away from any significant policies on climate change at the last conference, in common with recent moves from Labour. I will therefore not have any reasonable choice of policies on climate change in the next election. I find that deeply offensive, especially in a democracy.


"GARNHAM, Cllr Rob"
Posted by Kevin Lister at 3:13 AM No comments:

Please pass on my thanks to your staff for replying to my last letter.

I am delighted to receive the annual review of “The Prince of Wales and The Duchess of Cornwall for 2007.” I have read it in detail, and Miss Buchanan is correct in her assumption that I would find it of interest. In particular, I find the statistics on page 9 of particular interest where the document quotes that the Households carbon emissions are 3,425 tonnes of CO2, but that these are not audited in any way.

This is clearly somewhat higher than my emissions, which I estimate to be around about 1 tonne.

Given the disparity between the Royal Households emissions and mine, I request a break down of the analysis that has been used to derive the quoted figure in your report. Also, can you confirm if these emissions include reductions associated with carbon offsetting.

A copy of this letter will be published on my blog, http://www.kevsclimatecolumn.blogspot.com/, please note that you have my permission to put a copy of my letter your web site.

Thank you for your letter of the 14th October to The Prince of Wales. I do not think there is anything more that I can add to my letter of the 4th October, but I am enclosing a copy of His Royal Highness's Annual Review so that you can see more about his work, which I think might be of interest to you.


I will not be putting a copy of this letter on any public website, because it is personal and private to you -I would never consider doing otherwise and particularly not without your permission. 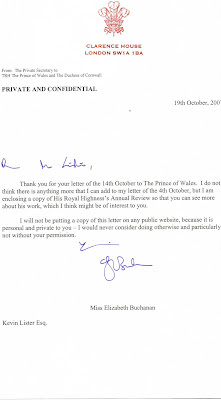 Posted by Kevin Lister at 2:38 PM No comments: