The dangerous link between climate change and Trident

In six months the country will be going to the polls facing the two most contentious decisions in human history -  what to do about climate change and what to do about nuclear weapons.  The decisions made will affect the rest of the planet forever. However, these will probably hardly feature in the debates because discussion of these topics is too awful.

The consensus of scientific opinion is that levels of CO2 have reached such dangerous levels that feedback loops are being activated which are leading to additional CO2 and other greenhouses gases such as methane being added to the atmosphere. This is now well know and supported by overwhelming evidence.

The Keeling Curve is the best measure of our failure to deal with the crisis. 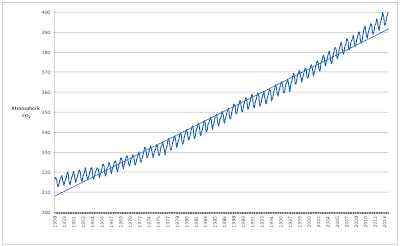 The following graph shows the 12 month moving average of the Keeling data. By drawing a line from the first to last point the convexity of the curve is evident. It shows the rate of growth steadily increasing over the measurement period and continuing to do so today. 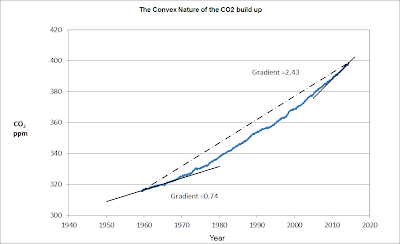 With this trend, simple maths shows we will reach the 450 ppm level in about 10 years. It gives us far less time to take the urgent actions than we are generally led to believe. The curve also warns that when we hit 450 ppm we will be on an accelerating curve and CO2 will explosively burst through this limit.  After this, the worst nightmares of runaway climate change are impossible to avoid.

Already the Western Antarctic Ice Sheet collapse is underway and the Greenland Ice sheet is melting far faster than models suggest. Paleontological records suggest a rapid catastrophic collapse is most likely. This will flood many of our major cities, nuclear power stations, ports and oil refineries in tens of years, not in hundreds. These crises will have to be faced against a background of other climate change driven catastrophes such as droughts and food shortages.

It is into this maelstrom of ecological disaster that the next parliament must make the decision on the Trident replacement. Trident is the ultimate statement in preserving  the business as usual status that is destroying the planet. Its planned operational life extends to 2060, yet the exponential explosion in atmospheric CO2 means society will collapse long before then.

It creates the ultimate illogicality of stretching collapsing societies to the limit by building hugely expensive weapons that will have the capability to destroy the planet long after it has been destroyed through climate change.

It drives three questions that must be answered before you give your support to Trident, or any other nuclear weapons system, in the next parliament:

The motivation to replace Trident is a response to the global instability that the forces of climate change and unconstrained industrialisation are driving. However, this requires a high carbon military industrial complex to be kept permanently operational along with an expanding economy to raise the taxes. This is the antithesis to the responses that we need to tackle climate change.

Trident is thus a stick through the spokes in the wheels of the climate change negotiations. In this context and at this dangerous time, Trident and the nuclear arms race it supports, are far more dangerous than we ever first thought.

I would therefore urge you to be clear in hustings and in your campaign literature leading up to the election, that while the above questions remain unanswered, you will not support the replacement of Trident and in the light of the explosive increase in atmospheric CO2 you will make clear that there can never be a tenable case for Trident.

Further References:
The Vortex of Violence and why we are losing the war on climate change.
The World in Chains
Posted by Kevin Lister at 6:48 AM No comments:

Why do climate change talks fail ? 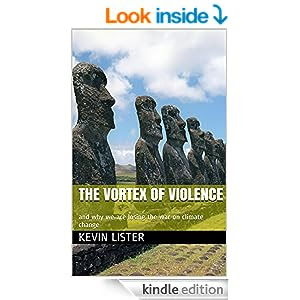 The Vortex of Violence and why we are losing the war on climate change is now available in Kindle and Kobo book stores.
Posted by Kevin Lister at 9:03 AM No comments: