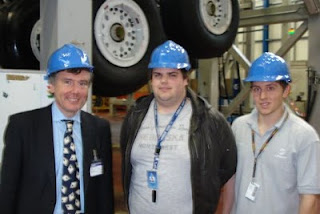 Dear Neil,
Enclosed is a copy of the  report I referred to this morning regarding CO2 emissions growth.
The report is dry and mathematically dense - if you need a hand getting to grips with the mathematics,please let me know.
The general gist is that at present CO2 emissions are increasing faster than exponential. To put this in perspective, if CO2 emissions were increasing at "just" an exponential growth rate which current data suggests is 3.4% per annum, within the next 20 years we will add as much CO2 to the atmosphere as has been added since the start of industrial revolution leading to the total destruction of our civilization.
However, the conclusion of this report is that the situation is even worse, with the exponential growth rate being coupled to the actual growth rate. In essence, this means that the more the CO2 increases, the more the rate of growth increases. The report's analysis does not even take into account the compound failure across the planet of the various carbon sinks such as CO2 saturation of the ocean, Amazonian die back, and methane release from the Arctic.
At present our greenhouse gas emissions projections will exceed the worst case A1F1 scenario of the IPCC report, and some predictions are such that by the end of this century atmospheric CO2 levels will be equal to levels last seen on the planet 250 million years ago at the end of the Permian Triassic extinction event where the average  temperate was 16 deg C higher  than today and 95% of  all life on the planet died out.
This issue is of overwhelming importance and transcends all other policy decisions. It is therefore vital that you:
References and sample false claims:

Posted by Kevin Lister at 5:47 AM No comments:

Another claim to the ASA

Another complaint to the ASA now they can investigate adverts - if you would like to submit a copy, please click here.
-----------------------------------------------------------------------
This complaint is made with respect to the claims on the Flying Matters web site.
Flying Matters is an aviation industry lobby group whose remit is to press for pro-aviation government policy and to improve the image of aviation in the public's eye. This essentially means subverting the evidence on climate change as it is impossible for aviation to continue to grow and meet the CO2 reduction targets that have been determined by the best science.
Flying Matters has been extremely successful in achieving their objectives: tax breaks have been given to the aviation industry to the tune of billions per year, government secured loans have been given to Airbus, airport expansion plans are still being developed around the country and the European Trading Scheme proposals were massively watered down.
A major component of the aviation industry's strategy is to claim that technological advancement will allow aviation to become fuel efficient and  "green" in the future. These claims are accepted unquestioningly by many of the airlines passengers and government officials. They are however totally without foundation, deliberately misleading and dangerous given the context of the current situation with climate change.
Hence, the specific claims that we are raising for ASA investigation relate to claims made on the Flying Matters web site, as stated below:
False Claim 1
The aviation industry is “Committed to improve fuel efficiency of new planes by 50% by 2020” as stated on http://www.flyingmatters.org.uk/about/
False Claim 2
Quotation from news interview and posted on the web site as a claim “As I said on the Today programme, the good news is that the aviation industry has already committed itself to reducing its emissions to 2000 levels by 2050 against a threefold increase in passenger numbers. That is a major challenge but one which we are confident the industry can meet through a combination of technology, use of sustainable biofuels and operational improvements. The inclusion of aviation within a global deal on emissions is also a crucial part of this mix.” as stated on their web site.

We have been in correspondence with Flying Matters to seek justification of these claims and they are unable to provide any back up evidence or a road map. In fact, this is not surprising, as to achieve these claims would require the laws of physics and the second law of thermodynamics, in particular,  to be breached.

With respect to the first claim, planes are not even on the drawing board that can achieve a 50% improvement in fuel efficiency by 2020. In fact, to achieve this claim would necessitate scrapping all the new planes today’s such as the Boeing 787 Dreamliner, the Airbus A380 and the new Airbus A 350 as none of these would be able to come remotely close to achieving these targets.

With respect to the second claim, we have done calculations based on the CO2 emission growth provided by the EU since 2000 and then allowed for the trebling of passengers growth as Flying Matters claim. To achieve their targets, all planes will have to be producing just 22.5% of today's average planes. This is impossible and to achieve this it would require the second law of thermodynamics to be broken. This law states that there is an effective maximum level of thermal efficiency that can be achieved which is about 40%, and this is where today’s engines are currently operating. Any future changes will be incremental and will become diminishing small, and certainly not able to achieve the enormous savings that are being suggested here. Likewise, the air frame efficiency of today’s planes is near optimum and any further improvements are likely to be small and will take many years of development. Since the industry expects today's new planes, which are nowhere near the targets given, to still be viable products in 40 years then it makes the claims even more ludicrous.
It is vital that the ASA tackle this abuse – Flying Matters have been delighted to point out that as a result of their lobbying and public onslaught, they have been able to achieve successes such as getting the Conservative party to drop its commitment to the quality of life agenda and carbon taxes.

See http://kevsclimatecolumn.blogspot.com/2010/11/dear-michelle-regards-statements-on.html for correspondence with Flying Matters.
Posted by Kevin Lister at 11:37 AM 1 comment: