Copy of complaint to the ASA regarding Airbus 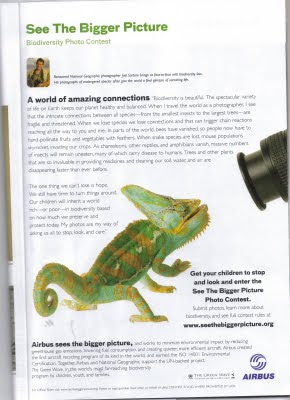 The advert in the National Geographic is titled “See the Bigger Picture.”

This is misleading for the following reasons:

The total emissions from aviation have increased ever since the first flight by the Wright Brothers. No improvements in efficiency in the past have ever been sufficient to overcome the increase in flights and despite Airbus’s rhetoric there is no evidence that the future will be any different from the past. This is especially so when the 2nd law of thermodynamics limits engine efficiency improvements and other fundamental laws of physics also limit aerodynamic efficiency improvements. Thus it is impossible to expect that technology improvements will offset the increasing number of planes. It is important to note that the aviation industry has run a campaign suggesting that technological advances can reduce their greenhouse gasses whilst the industry continue to expand. This advert must be seen as part of this initiative. The advert is thus misleading because it contributes to the general erroneous perception that the aviation industry can reduce total emissions by technological advances.

The aviation industry is pushing the biofuel argument. Biofuels have already led to mass forest clearances in the pursuit of palm and sugar beet production and the National Geographic has reported extensively on these problems. Estimates have already been advanced that moving the aviation industry just part of the way to a biofuel solution will require as much land as Western Europe. This is already causing an incalculable loss of biodiversity. The advert is thus misleading as it portrays Airbus as being primarily concerned with the protection of biodiversity, when their biofuel solutions represents the biggest threat to biodiversity on the planet.

The advert refers to “lowering fuel consumption” and “more efficient aircraft.” These statements are clearly intended to reinforce the perception that the greenhouse gas reductions relate to those greenhouses gases emitted during the flight and not just in the manufacture of the plane. This is misleading for the reasons set out above.

Airbus has deliberately pursued the sale of A380s and A340 as private jets. The use of these planes in this manner is totally contrary to any attempts at improving fuel efficiency per passenger. Thus as Airbus is prepared to sell these massive planes for single person use it cannot in anyway claim to be reducing greenhouse gas emissions or producing more efficient aircraft. In this context the advert is totally misleading.

The scientific consensus is that we must reduce greenhouse gas emissions by 90% by 2050 to have a reasonable chance of avoiding runaway climate change. In this context the idea that minor efficiency improvements in aviation can be environmentally adequate is false and the fact remains that flying an A380 to Australia will always be environmentally destructive. The advert is thus misleading in deliberately ignoring this basic fact.


Click here to get the Advertising Standards Authority to submit your complaint.
Posted by Kevin Lister at 6:47 AM No comments: