Swindon Think Slam - 3rd Round - Why education must preserve igonrance

In 1743 the MP Soames Jenyns said of education, "For those born to poverty and the drudgeries of life ignorance is an opiate capable of infusing insensibility. They should never be deprived of this by an ill-judged and improper education. Ignorance is the basis of all subordination, the support of society and by which means the labourers are fitted for their respective situations."

When I read this, I was teaching a young lady from the villages of Robert Mugabie's Zimbabwe.

She explained how their education system worked. The elders taught the youngsters everything they needed to know to survive, what plants to eat, which ones to avoid, which animals to hunt and how to raise livestock. Rich knowledge was passed on without OFSTED and without government set curriculums.

For her, ignorance was not an option; so on this measure is the Zimbabwian education system better than ours?

But our future will be dominated by climate change and ecological collapse. When today's cohort of primary school children graduate from university, atmospheric CO2 will be so high the worst nightmares of climate change will be impossible to stop. As their industrial society collapses, the education system will push all the students in its care to breaking point so that the best possible candidates can get the last remaining jobs.

Thus, preparation for an industrialised society must remain the primary objective of the education system and it must normalise a high carbon life style, despite the science on climate change.  So the education system will send students on high carbon educational trips abroad, set up relationships with high carbon industries and give careers advice to encourage students to get jobs in these areas. The Aldermaston Atomic Weapons Establishment even organises “chain reaction” competitions for primary school children to help.

So should a responsible teacher step beyond the realm of political correctness and explain to their students this is wrong and the CO2 emissions from the society their education system is preparing them for means they will be fried, roasted, boiled and baked?

To subject impressionable young people to such conflicting messages is child abuse and a serious collective attempt to educate the young on climate change would undermine the competitive advantage this country will need as things go bad. So we don’t do it and we return to the wisdoms of Soames Jenyns; our education system must preserve ignorance. Without this, society will collapse. 150 years of free education has changed nothing and the Zimbabwean education system beats ours. 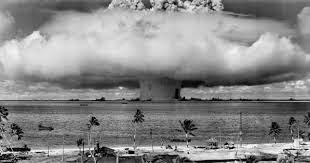 The Permanent 5 Security Council members of the United Nations are the world's greatest nations. They are the USA, UK, France, Russia and China.

They are all bad nations with long lists of misdemeanours:

In 1946, fresh from fighting the fascists in Europe, America went to the Tropical paradise of Bikini Atoll and forcibly removed the entire population which had lived there for thousands of years, burnt their houses to the ground and then started a nuclear weapons test programme which created a scorched earth that even Hitler could not have envisaged. Nobody else even had a bomb.

In 1952 Britain continued the scorched earth tradition by irradiating the Aboriginal homelands in Australia with its atomic bomb tests. Not content with this, they went on to do the same to the Christmas Islands with H-bombs.

All five continue to violate the Nuclear Non Proliferation Treaty.

To become a member of this club, it was not enough to be on the winning side of the Second World War, a nation also had to be an industrialised power.

Because India, Africa and the Middle East were not industrialised at this time, they were not invited, despite suffering massive losses in a war that was not even of their making. Bringing them in today would deprive the P-5 group of its power, so they are kept out.

There is also no representation from the global indigenous communities, despite always being in the vanguard of the fight on climate change, environmental destruction and human rights. To acknowledge their rights would be to curtail industrialisation and economic growth.

So the purpose of the P-5 group is to preserve the power in perpetuity of the most powerful nations in the world. This is fundamentally anti-democratic and racist.

This illegal group has also determined amongst itself that the possession of nuclear weapons by its members is legal. They are now embarking on a collective upgrade of these that is as big as anything seen in the Cold War.  To enable this, they each need a high carbon military industrial complex and so must either directly or mendaciously stop climate change agreements.

It means the P-5 cannot address the main security challenge of today which is climate change. On the contrary, its very existence normalises destructive industrialisation and blocks the progress we need. It encourages other nations who aspire to have an equal say in world politics to acquire nuclear weapons and is thus inherently proliferatory. It embeds racism and nationalism into the world's political system.

It is time to replace it with an elected chamber, where the world's people have an equal say in its membership and whose purpose is to govern in the interests of the survival of the people and the planet.

Posted by Kevin Lister at 1:26 AM No comments:

Swindon Think Slam - 1st round, why 16-21 years olds should be the only ones to vote. 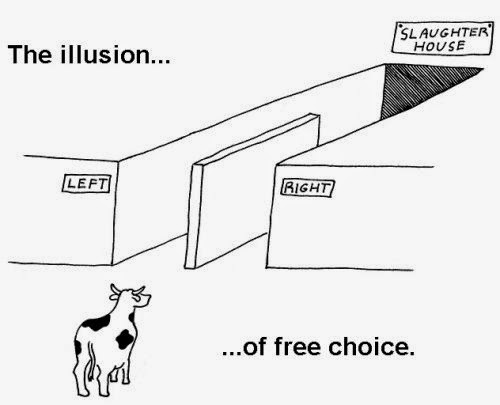 If democracy is so important that we send our young to die in wars to defend it, why does any fool or crook have a vote?

Why should the selfish fool who flies a polluting private jet have the same vote as someone who sacrifices all to cut CO2 emissions?

Why should a top banker who receives a million pound bonus by virtue of tax payer bailouts have the same vote as a pensioner whose savings were destroyed in the banking collapse?

Why should a tax evading crook like Richard Branson even be allowed to vote?

Why should the vote of a Trident submarine captain whose job is to comply with a command to destroy the planet, without question, be the same as a gardener who job is to create beauty from nothing?

These people were not born bad, but became corrupted by a society which values individual success above societal enhancement.

But most of us have not risen to the great pinnacles of society and are simply struggling to survive. In the face of runaway climate change, we are forced to prostitute ourselves to industries we know are destroying our planet. Anyone working in the arms, oil, car or travel industries along with many others do so in the knowledge that their actions contribute to ecological collapse. To enhance their short term prospects of survival they must be silent on this and vote for governments that will maintain the status quo of destructive industrialisation.

The struggle for survival in an industrial world corrupts us all. In so doing, we parallel the Kapos in the German concentration camps. They were the jews that did the dirty work the SS would not do. They pushed their brethren into the gas chambers and took their dead bodies out. They did it knowing it was wrong, but it was the only way they could survive and they had no choice in the matter. They also had to hope for train loads of new victims to keep coming, because without these they too would be destroyed.

In these circumstances, giving the successful SS guards and the corrupted Kapos a vote in the running of these nihilistic camps would never legitimise them. Yet we, who have a similar struggle for survival, legitimise our government’s inaction on climate change with our votes.

So for a government to hold legitimacy, it must have a mandate from the people who are not corrupted by either success or the struggles for survival.

This would change everything. General elections can still be held every 5 years, but political parties would have to campaign on important long term issues such as climate change, not on short term political advantage. Nor would they be able to recklessly send our young people to war.

It means the youngsters today, who are suffering from a plague of mental health issues as they see their future prospects squandered by the powerful elder generation, are put in the driving seat where they deserve to be.

We might then, just, get governments that will act in the best interests of everyone and the planet.
Posted by Kevin Lister at 1:05 AM No comments: