Festive greeting to MPs in the lead to the General election 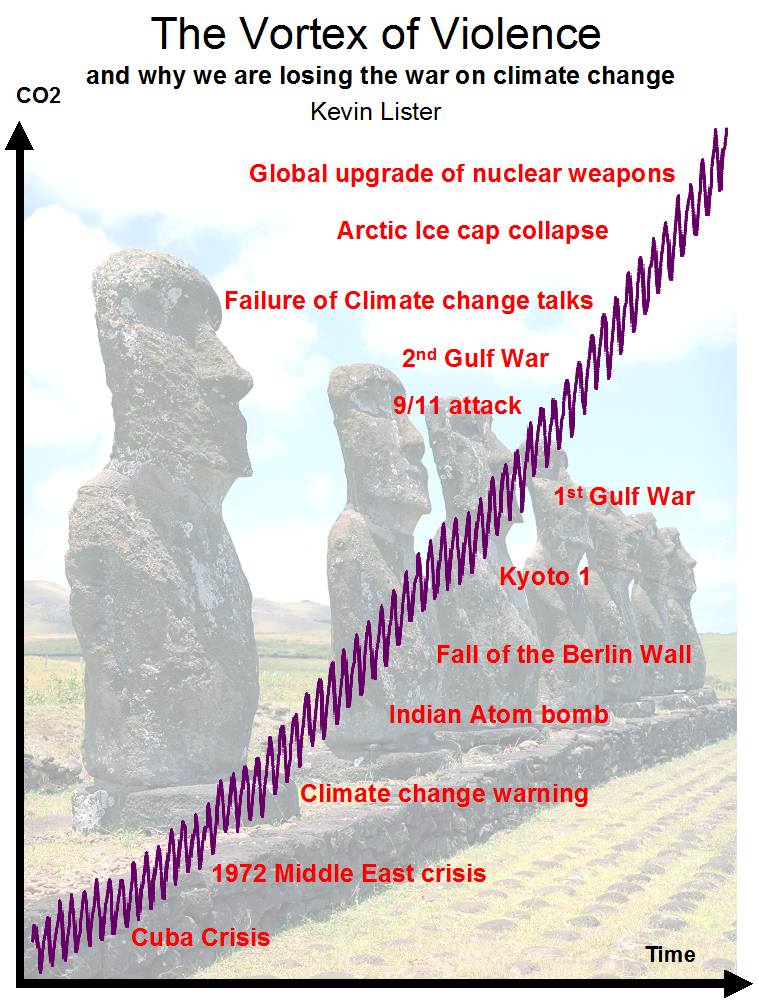 Dear MP,
Wishing you all a happy new year.
The festivities and consumerism of this time of year make it difficult to appreciate the destruction we face from runway climate change and easy to forget the increasing danger posed by nuclear weapons. I guess this is why it is increasingly encouraged year after year.
You will already have had two emails from me which link our inability to address climate change with our decision to proceed with Trident. The first explained the super exponential growth of atmospheric CO2 means we are left with only a couple of years to move to the zero carbon economy needed to avoid the worst nightmares of climate change and that when we hit the critical tipping points the rapidly accelerating trend will drive us deep into the danger zone. The second, as an open email to Ed Davies, explained that the pursuit of Trident locks us into an industrial race that makes climate change agreements impossible.
I have received many replies to which I am grateful. A common point made in these was that  strict parliamentary protocol prevents MPs other than my own from taking action on my behalf.  However, emails on this matter to my MP (Geoffrey Clifton Brown) remain unanswered.  This is hardly surprising from a man who said in a hustings debate, with the dismissive arrogance that only an Etonian millionaire can mange, that there is nothing wrong with having more millionaires in the cabinet than women.
My inability to get representation contrasts sharply to the access that corporations committed to ecological destruction have to the levers of power. It illustrates a fundamental limitation to our democratic system and an inversion of processes - those of us that vote have no influence on critical policy and those corporations that don't vote do.
The many replies reflected a range of views to which I am grateful. At one extreme David Davies (Monmouth) from the Conservatives claimed that the climate has not changed for the last 17 years. Perhaps as a keen amateur boxer, his brains have been too bashed out to see the obvious, or perhaps he is just more honest in his denial than those who pretend to do something, yet do nothing  At the other extreme where receptive MPs from all parties.
In my previous emails, I advocated that nuclear weapons and climate change talks must be integrated. In my book I have demonstrated that unless this is done, then the chance of success in either is less than finding a single atom at random from all the atoms that make our planet. The extraordinary collapse in the price of oil driven by the economic warfare Saudi Arabia is waging on Iran as a result of the nuclear weapons stand off and abetted by American actions to do the same to Russia has validated this more brutally than all the detractors could have imagined. It makes the failure of the Lima COP talks even more stark and keeps the chance of a worthwhile agreement in Paris at absolute zero. The result being a world about to embark on a last binge of cheap fossil fuel consumption as the ice cap collapses and methane belches from the Arctic.
The unavoidable reality is that the nuclear weapons standoffs around the world are making any chance of controlling the decent into the chaos of runaway climate change impossible. The extraordinary events of the last weeks make it more important than ever for us to recongnise the linkage between the decision we make on nuclear weapons and our failure to address climate change. Instead, we are increasingly being left with the question of how many more festive seasons there will be left to enjoy.
Perhaps in the spirit of direct democracy that the independence vote in Scotland demonstrated and the EU referendum that the Conservatives promise, the decision to proceed with nuclear weapon deployments in the face of runaway climate change can be put to the people if the election result does not cause its abandonment. The nature of the UK political environment uniquely allows this debate and politicians should not squander the opportunity it provides.
Kevin Lister
Posted by Kevin Lister at 3:18 AM No comments:

The cost of the illusion and can we avoid a slide to a totalitarian state.

Talk given on 12th Dec at Swindon, click here or here

As the cost of climate change mounts can we avoid a totalitarian state?

Posted by Kevin Lister at 1:56 AM No comments:

The following email has been send to Ed Davey, climate change secretary and copied to all other MPs. At the time of writing, Ed Davey is attending the COP talks in Lima as the prognosis for climate change continues to exceed the worst case scenarios by increasingly severe margins:

I recently circulated an email to all MPs questioning the logic of pursuing a nuclear deterrent when the overwhelming evidence is that a complete and devastating economic collapse will occur during its operational life time due to the combined effects of climate change and energy shortages. In fact, the financial constraints that the government is now having to manage and which are evident in the Autumn Spending  statement are indicative that the economic collapse has already started.

My email highlighted that by pursuing Trident, it makes agreement on climate change impossible due to the massive military industrial complex that must be kept operational and which can only be funded by an expanding economy. Both of these reinforce competitive engagement between nations at a time when co-operation is desperately needed. It therefore extinguishes any slight hope we may have.

MPs from all parties responded. However, with the exception of the smaller parties, few responses demonstrated any acknowledgment of the extreme danger that climate change is likely to cause in the very near future (i.e. within 10 years).  Indeed, the Labour Party front bench said in its response that climate change and nuclear weapons were separate issues and back benchers from from the governing coalition continued to virtually dismiss climate change as a serious issue. This is demonstrating the old adage that if it is easier to avoid taking hard action than facing it, this is what will be done, irrespective of the evidence.

In your interview in the Telegraph, you have admitted that any agreement in the Lima COP talks is unlikely to be adequate to stop the global temperature rising above 2 deg C and that we have only one year to take action to save the planet. In this case, if you stay silent you are contributing to the writing of our suicide note.

You have no choice. If you are serious about climate change and Britain playing a full role in developing a global agreement to give life on this planet just the slightest hope of survival, then you must link climate change and nuclear weapons talks together at the highest level.

This email will be copied to all MPs

This Friday, 12th December, from 7.40pm at the Friends Meeting House, Kevin Lister will be speaking on “The Cost of the Illusion” and positing the further question - can we avoid a decent into a totalitarian state.
The talk comes at an apposite time. It is shortly after the government’s autumn spending statement and the climate change talks in Peru.

In the spending statement, the government has revealed the many stark conflicting messages that it must manage.  The Chancellor claims that GDP has increased, yet tax receipts are down, wages are down and the budget deficit is worse than expected. But, we are told not to worry because it will be okay be 2018.

The talk will explain why these contradictions in financial policy exist and that things will definitely not be okay in 2018. In fact, the opposite is true; things will be an awful lot worse driven by the economic impacts from climate change. However just as the Chancellor does not want to acknowledge these drivers, nor do the organisers of the UN climate change conference.

The result is that an illusion of affordability is created, which is masking a dangerous drift towards a new form of totalitarianism.
Posted by Kevin Lister at 1:49 PM No comments: