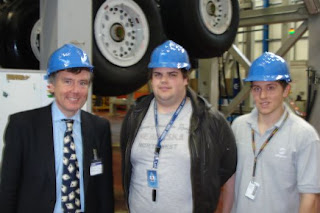 Neil Carmichael has steadfastly refused to respond to emails and correspondence I have sent him on matters of supreme importance to the future of this nation and the global community. In doing so he is violating the following clauses of the “Code of Conduct and Guide to the Rules relating to the Conduct ofMPs”

The breaches of specific clauses are outlined below:

Clause III.  Public Duties of Members
6. Members have a general duty to act in the interests of the nation as a whole; and a special duty to their constituents.

I have asked that he raise the question in parliament of the carbon budget associated with the decision to proceed with Trident.  At present the government is working towards the "Low Carbon Transition Plan" which was issued in the last parliament. A key commitment of this was "that all major decisions would be subject to a carbon audit." This position has been echoed in other documents and position statements of this administration.

The decision that we take on our nuclear deterrence is the most major decision of all. Its construction, operation, defense and our subsequent response to adversary nations who are forced to respond in kind requires massive military industrial complexes that are energy hungry and require expanding economies to fund.  As well as having enormous implications for this country, it forces our competitor nations to reciprocate and makes a dangerous situation on climate change much worse.

I had previously written to the Department of Energy and Climate Change on this topic, copying the correspondence to Neil Carmichael, requesting that they commit to preparing a carbon budget for Trident and incorporate Trident with climate change talks. They refused. This makes a mockery of all statements and positions that the government takes on climate change. It is hard to see how any meaningful progress towards international climate change agreements can be made without honest debate on the carbon budget of those items that preserve the existing status-quo of the power structures and nation state competition.

It is therefore of supreme importance that this is raised proactively in parliament and debated thoroughly.

Following the lack of response from DECC, I asked Neil Carmichael to raise this question in parliament. He has not done so, nor even replied to my correspondence.

By willfully ignoring my correspondence he is supporting the status quo position that the Trident decision should be made independently of its climate change impact. That status quo position is leading us towards ecological breakdown, which is against the interests of the nation. Neil Carmichael is therefore failing in his duty “to act in the interests of the nation as a whole.”

Following a peaceful protest at the Fairford Air Tattoo in 2010, when I hosted a spoof website to protest at the climate change impact of the military industrial complex, I was subjected to an early morning raid on my house, arrested for fraud and had my job threatened. I remained on police bail for 18 months, at which point all proceeding were dropped without charges even being made and without apology.

This was a blatant and crude attempt to muzzle dissent and impose a de-facto restraining order. A state response of this type is normally associated with the odious dictators that we profess to abhor, and which we build our military to protect ourselves again.

I arranged a meeting with Neil Carmichael in his constituency surgery to raise the issue. He agreed to raise the issue further with the Chief Constable and advise accordingly of the response. He did nothing, and I had no further response from him.

This is a clear case of Neil Carmichael failing in his “special duty to [his] constituent” whose right to free speech and peaceful protest was denied by the apparatus of the state acting in the interests of large corporate interests.

Basic maths and engineering demonstrates conclusively these claims are impossible. Yet they were peddled consistently by the now defunct lobby group Flying Matters on behalf of the aviation industry. Similar false claims continue to be used by others and have had a significant impact on government policy and public attitudes to aviation. False claims of this nature are supported by combined marketing budgets measured in the billions.  This is fraud, which by definition is the use of false information to seek gain.

This evidence was presented to Neil Carmichael. We asked that he raise in parliament the issue of fraudulent advertising on the environmental credentials of the aviation industry.

He took no action on this. On the contrary, he continued to raise questions in parliament in support of aviation.

By not raising this issue he is failing to “act in the interests of the nation as a whole” as the nation must have correct information on the climate change impact of large corporations and public debate needs to be held to determine how they can be prevented from abusing their power.

Clause  IV.  General Principles of Conduct
Leadership
Holders of public office should promote and support these principles by leadership and example.

We note that Neil Carmichael is a member of the Environmental Audit Committee. Despite this he publically supports the construction of the Trident replacement system and been an advocate for high carbon industries such as aviation.

In no way can this be called leadership by example.

By contrast, his actions are a classic case where people with a diametrically opposed position to the objectives of a group gain a position of influence to subvert its good intention.

Neil Carmichael has made it clear he has a personal interest in high carbon industries such as aviation. He has written in the local press on his reflections on holidays in Morocco and Turkey, all of which involve flying. By contrast his predecessor, David Drew, refused to fly on environmental grounds.

His inaction to follow up any request I have made of him on the environmental impact of aviation contrasts with his evident personal interest in allowing aviation’s continued destructive growth.