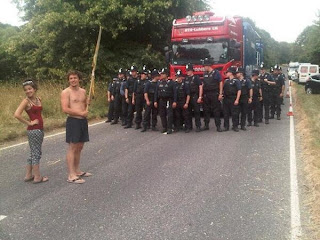 The absurdity of policing in a collapsing world.

I would like to thank you for the policing experience at the Balcombe fracking protest which in micro gives a perfect picture of the macro to come as ecological warfare breaks out across the planet.

My time at the camp has been a strange couple of days of juxtapositions. I have seen in your lines police officers uncomfortable about using their right to violence against women and children intent on protecting their community standing next to other officers delighted to use that right of violence. I formed lasting bonds with people I had only just met while fighting against an organisation that can never be met. I swam in a lake with fellow campaigners knowing that pleasures like this will soon become impossible as the environment gets hijacked and ransacked. But the biggest juxtaposition of all, is seeing the police fighting against the people they are supposedly there to protect.

I asked several of your officers where they thought this protest would end. They claimed that they did not know. I would suggest that they do know, but do not want to acknowledge the obvious. As our ecosystem collapses in the face of climate change and resource depletion and the economy becomes increasingly energy dependent, protests like Balcome will be the norm of your policing efforts, not the exception, and they will become increasingly intense with no end in sight. This is not what your best officers signed up for.

It is clear on speaking to your officers they are under a dangerous misapprehension. They claim that they are neutral, when they clearly are not. It is their job to uphold the law and the law is not neutral. The law of this country makes it legal for a company to destroy the environment, to expand and create greenhouse gases. That same law makes it illegal for anyone to stand in the way and stop the destruction. In no way can this be described as neutral.

As a result of your officers upholding the law and not staying neutral Cuadrilla's lorries deliver the drilling equipment, the drilling goes ahead and the environment that people need is destroyed with the help of your police protection. The protest is already unsuccessful in achieving its objective of stopping the drilling so the same battle of attrition will move to the next site. These protests are tolerated by you only so long as they are ineffective. Effective protest would be to stop the lorries by force now that all appeal to reason and logic has failed.

But as ecological warfare commences across the country and the world at large, this covenant is invalidated. The inequalities and biases within the legal system become evident to society at large. Very soon people will conclude on mass that it is no longer in their interests to allow you to maintain your monopoly of violence when the legal system is weighed against them. When this happens society breaks down. It has already started; the inner city riots were the first manifestation where people on mass chose not to obey the law and more will come as food prices escalate in the near future with climate change.

You must by now surely be cognisant of the increasingly harsh laws being passed to stamp down on dissent in the face of the building ecological apocalypse yet your best officers are increasingly reluctant to uphold these laws. It is unavoidable that it will become apparent to them that by enacting the law they cannot remain neutral. You might want to find out how many are on the point of mutinying against this and to question what happens when this inevitably starts. Will you be able to stop it? Will you be forced to replace those thoughtful officers with less thoughtful ones and would you be happy to command this new force of psychopaths? Are you the best person to pre-empt unavoidable transformation by refusing to command your officers to enforce environmental destruction?

I trust that you will correct the dangerous misunderstanding of neutrality that those in your command have and clarify that it is the remit of the police to uphold the law irrespective of the morality of the law, the damage the law does and the way that these laws are passed.

I look forward to your feedback after you have had these discussions.
Posted by Kevin Lister at 9:09 AM 2 comments: