To Chris (and the other global warming deniers at the Telegraph)

You are either liars or stupid.

What Chris is stupid enough to do, is to mix up correlation with trends. By taking the 1998 as a start point, he starts that period with a year that was exceptionally hot due to a severe El Nino. He then compares every other year against 1998 and ignores all the data in between. The effect of 1998 on the data set taken from that date to today simply reduces the correlation.

The rapid rise in temperature in 1998 during the El Nino shows how sensitive our climate is to perturbation. It should be seen as a warning of the risks we face, not an opportunity for imbeciles to distort the science further.

Chris’s basic argument that scientists don’t know what they are talking about when predicting climate change is a bit rich from someone who does not understand basic school boy statistics. 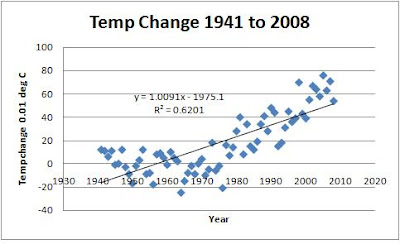 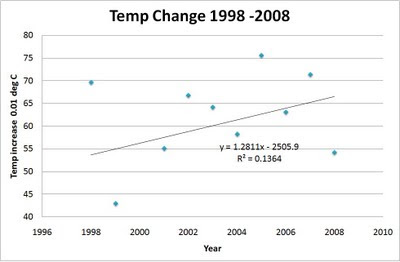 Data source for graphs, NASA
Posted by Kevin Lister at 9:42 AM 2 comments:

Another Chance the ASA to show they will not stand by

Complaint to the ASA about Finnair Advert

This advert is making the claim that by choosing to fly by Finnair, you can be “eco-smart.”


This is totally misleading and breaches the ASA code, sections 49.1 and 49.2.


Section 49.1 says “The basis of any claim should be explained clearly and should be qualified where necessary.” There is no explanation of this claim. To say that their planes are brand new is not an explanation of why it is eco-smart to fly with Finnair. Put simply, planes will always produce huge amounts of emissions, irrespective of how modern they are. If an airline expands its business as a result of a market shift towards modern planes then the emissions will increase accordingly. The extra emissions will outweigh the savings. None of this is eco-smart.

Also other airlines and airplane manufacturers are making similar claims about their environmental benefits, i.e. Easy Jet, Airbus, and Boeing. Finnair’s advert makes no comparison between the age of their planes and those of similar operators or no comparison against the most fuel efficient planes available today.

Section 49.2 says, “Claims such as ‘environmentally friendly’ or ‘wholly biodegradable’ should not be used without qualification unless marketers can provide convincing evidence that their product will cause no environmental damage when taking into account the full life cycle of the product.”

There is no qualification to this advert. It simply implies that the passenger is “eco-smart,” if they travel with Finnair. The advert does not provide any quantification of the CO2 emissions per person taking a flight and certainly does not put it into context, i.e. by comparing with emissions of a UK holiday.

Furthermore, the advert is aimed at users of London Underground. In general the users of Lonn Underground will not be as well versed about the issues surrounding climate change and the impact of aviation as readers of publications such as the National Geographic. As such they are more likely to be persuaded by the lie that flying by Finnair was in actual fact eco-smart, rather than highly environmentally damaging.
Posted by Kevin Lister at 8:25 AM No comments:

Email ThisBlogThis!Share to TwitterShare to FacebookShare to Pinterest
Labels: Finnair

More ongoing dialogue with the ASA

You may wish to close this discussion, but I will not and you will be hearing more from me. Every time some organisation such as Airbus flexes its marketing muscle to discredit or subvert the debate on climate change, I will complain. On the basis my past experience of complaining to the ASA on false environmental claims, I expect the ASA to reject the complaint, and I will then appeal.

As for the points in your letter:

I am not wrong to state that you and the ASA have upheld the Airbus advert. Your actions speak louder than words. You have chosen to take no action when you should have done so. The ASA web site says that that one of your aims is to stop misleading adverts. Airbus's claim that "it is working to reduce greenhouse gas emissions," is totally misleading and they are now free to continue these claims.

You say in your email that "I had not succeeded in making out a case." However, irrespective of what evidence that I would have presented, you would have come to the same conclusion, especially when it is absolutely clear that this decision is in breach of your own code. I would be interested to know how many ASA adjudications that you actually overturn, especially on sensitive issues such as this. I have previously spoken to people at the ASA and been told that ASA council decisions are rarely overturned by your "independent review."

So you are aware of the effectiveness of these types of adverts, only recently the government gave a 350 million pound loan to Airbus for the new A350, which was justified by Peter Mandelson as supporting the development of an environmentally friendly plane. This is after a billion of yet unpaid loans to support the A380. This comes at a time when the poorest people in our society are being told to expect to pay increased fuel bills to combat climate change. This is a propaganda coup that Goebbels would be proud of.

I am replying to your email below, not because I think that there is much value in prolonging this exchange of correspondence (now that I have closed my file on the case), but because I regard it as desirable to put on record where I consider that you have got things wrong.

You are wrong to suggest that in my letter to you of 28 September I have made a decision to uphold the Airbus advertisement. You are also wrong to accuse me of supporting what you describe as Airbus' propaganda and false representations.

The only point contained in my letter of 28 September was my conclusion that you had not succeeded in making out a case to justify my asking the Council of the ASA to reconsider its decision not to investigate a complaint which you had made about an Airbus advertisement. I have not "upheld" that advertisement. Nor have I said that I support that advertisement. I have merely said that you have not persuaded me that the ASA Council's judgement was either unfair or unreasonable.

You also imply that the ASA is biased in favour of business. It is not for me to try to defend the ASA. It is well able to do that itself. My own experience of dealing with some 500 review request cases during the past ten years has shown me that you are totally unjustified in making such a statement.

Posted by Kevin Lister at 2:33 AM No comments: