Why do climate change talks fail

Why do climate change talks fail? If the eighteenth round of talks failed, can we expect the 19th to succeed?  Why are all nations collectively committing mutual suicide? Why are we ignoring the science of climate change? Why do we not care about our children? What can we do? What sequence of events must we demand to make progress? Is the concept of the nation state dead?

These fundamental questions are addressed in "The Vortex of Violence and why we are losing the war on climate change." 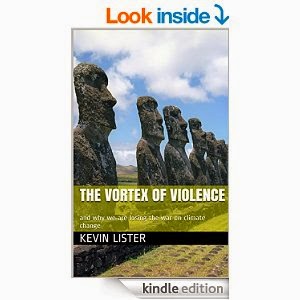 Chapter 1 - No hope, false hope, some hope - the three witches of the apocalypse


Despite much talk that climate change means the existing business and economic system cannot be maintained, governments will do all in their power to maintain business as usual and use what ever mendacious means are necessary.

Atmospheric CO2 is building up super-exponentially. In about 10 years it will be above 450 ppm, at which point runaway climate change will be impossible to avoid. Our highly connected infrastructure is based around dangerous chemical and nuclear plants putting the planets risk exposure far in excess of anything the planet has seen in the past.


Chapter 3 - Why climate change agreements are not working

The objective of international agreements on climate change is to limit CO2 emissions without any consideration of how this impacts the competitive environment that nations must survive within. It is a strategy doomed to failure.


Our understanding of democracy is that we should have freedom and be allowed to develop economically, but tackling climate change requires all of society to operate within strict limits imposed by a falling ecological ceiling. Nobody has any real option to vote for a party that will make sustaining civilisation its priority and determining how we should operate within fixed limits, instead all political parties merely offer different choices for preserving industrial growth. As a result, our ideals of human democracy have been replaced with the reality of an industrialised democracy.


We are conditioned from early childhood to be able to compartmentalise our thinking, and this forms the basis of the education systems in the industrial economices. It has the unintended consequence of encouraging us to find solutions to the three critical problems of today, climate change, nuclear disarmament and economic reform individually. If we continue to do this, the chance of success in any one is about 9E-63, about the same as selecting a single atom from all the atoms that make planet earth.


Chapter 7 - The War we are in and ecological overshoot


Chapter 8 - What happens next and what do we do about it?


Strategic choices are never easy to take. We must firstly integrate climate change, nuclear disarmement and financial reform. We must put nuclear weapons on the climate change negotiating table and this forces entire global political system to change. Key institutions such as the UN P-5 need to be replaced and a modern day alternative to the failed Baurch Agreement must be strived for. These will not guarantee success, but failure to do so will guarantee failure.


Chapters, completed book and research materials will also be published on www.nucli.biz

Posted by Kevin Lister at 7:33 AM No comments:

Submission to the independent aviation commission


The "Independent Aviation Commission" treads in the footsteps of the disbanded "public consultation on sustainable aviation" that led nowhere. The fact that aviation can never be sustainable might have something to do with it.

The independent aviation commission, like the public consultation before it, has asked for comments on equally stupid questions concerning the long term viability of aviation. The aviation commission like many other government departments, quangos or think-tanks totally ignores that climate change is already collapsing our economic model and things have hardly begun to get going yet. Today we are struggling with a 1 degC temp increase and are on track for the temperature to rise by 6 degC.

Like many others the Independent Aviation Commission assumes our economic model will last forever, simply because it has lasted fifty years so far.

Instead of having the courage to face reality and act on it, they want to pontificate on the fine tuning and accuracy of the demand forecast models provided by the aviation industry which guess how many passengers will go to holiday destinations in 2050 despite climate change science telling us those destinations will be either flooded or so hot that you will die if you venture outside.

It is hard to know what to say in the face of such institutionalised ignorance.

Our submission can be found here.

Posted by Kevin Lister at 7:02 AM No comments: