The sinking of the titanic 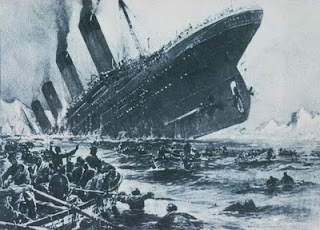 Posted by Kevin Lister at 4:46 AM No comments:

Email to Rob Garnham,Chair of the Association of Police Authorities and supporter of the rich, on the riots

Dear Rob,
It was interesting watching your interview on Sky News this morning when you expressed the usual outrage that the rioters were criminals, which strictly in accordance with the law they are. However, to dismiss them as such without seeking answers to the broader question as to why so many youngsters are prepared to become criminal on mass, sets the foundations for further riots.
You may remember that we had correspondence in the past on the implications of policing in the face of climate change and future societal collapse.
I warned that in a society that creates a hopeless future for our children, as we are currently and deliberately doing, then societal break down can be the only outcome and that it would come quick, suddenly and overwhelmingly.  Unfortunately, you found my argument and warnings offensive. It gives me no great pleasure to see it coming true.
Our young people face an increasingly bleak future and they instinctively know it. People of our generation (the people over the age of 45) continually talk about how the next generation will have to simultaneously solve climate change, peak oil, pay off the national debt, whilst at the same time we ignore their peaceful protests on student debt, we create an economic system that will never allow them to buy their own home or secure employment and create an environment devoid of moral values.
Yet at the same time we condone criminality at the upper reaches of society. In your own backyard, you supported the fraudulent business case for Gloucestershire Airport which forced the local community to back a development to provide an airport for private jets whilst simultaneously polluting their own environment, all at the time of public service spending cuts. These crimes funnel wealth from the poorest to the richest systemically and efficiently,  and they do it on a far bigger scale than the rioters have achieved. Gloucestershire Airport is but one of many instances, so it is hardly any wonder vast sections of our society are angry and disenfranchised.
We have seen infectious madness passing through the upper reaches of society through their wanton disregard for science and morals for many years. We should not be too surprised when we see infectious madness passing through society's disposed.
In previous correspondence (copied to you) I pointed out that “Our society is currently based on economic growth and our laws and institutions are predicated on supporting this model. Economic growth is unlikely to be our future.” That bleak future is starting now. Economic growth has reversed for the majority of our community as a consequence of rising raw material and food costs and will reverse quicker as the implications of climate change bite harder.
What we are seeing today is a foretaste of the future and if we carry on with the current moral and economic framework, things will get worse much quicker.
As the Chair of the Association of Police Authorities, it is incumbent on you to take the time to understand the root cause of these events and have the courage to grasp hold of the dreadful realities that face us. You can not rely on wishful thinking and the preservation of the current destructive status-quo.
Kevin Lister
Posted by Kevin Lister at 4:51 AM No comments: