A Brief Analysis of the 2015 BP Statistical Review

A pdf version is available here and here

Fossil fuel consumption is increasing in all the developing regions of the world and outstripping reductions made by the developed world. It makes the prospect of climate change agreement at the December COP impossible to contemplate.

It is already well documented that the explosive increase in fossil fuel consumption across the developing world, in particular China, reflects the shift in manufacturing to these regions. This is especially so with products and services requiring steel and cement production which are unavoidably carbon intensive. This was initially reflected in exponentially expanding coal consumption. Now that Chinese coal consumption has leveled out, oil consumption is now expanding exponentially reflecting China’s transition into its next phase of destructive growth.

Today’s globalised economy interconnects national economies such that the wealth of one country is dependent on the wealth that others can create for it. In this environment prothletising about individual national successes in achieving carbon reductions is irrelevant.  What is needed is far more profound efforts to jointly reduce emissions. This can only be done with joint sacrifices.

The growth of renewables is stalling. It is concerning that this is happening when it still constitutes such a small percentage (1.81%) of the total global fossil fuel energy production. It severely challenges the arguments that are being put forward at the COP conferences that renewable technologies will provide the key to a zero carbon economy.

There is no evidence to substantiate the claim that developing economies will take up new low carbon technologies in such a significant way that they will leap-frog the fossil fuel consumption stage of past industrialised economies.

Given the severe state of climate change as measured by the Arctic ice cap melting and atmospheric CO2 already exceeding 400ppm, these figures demonstrate that unless we radically change our approach we will be unable to avoid the total collapse of our ecosystem and our extinction.

This set of data brings the concept of Mutually Assured Destruction (MAD) that formed the basis of the Cold War into a new and more brutal focus. Unless we can all agree on an immediate and significant reduction in CO2 emissions along with restoration of our ecosystem and successful geo engineering, then MAD is our fate.

This report is based entirely on the 2015 BP Statistics Review, which covers trends to 2014. All energy production and consumption is broken down into Millions of Tonnes of Oil Equivalent (MTOE) for easy comparison. There will inevitably be errors with this conversion factor, however it still provides a useful comparison for overall trends.

Global fossil fuel consumption continues to grow, albeit the rate of growth has slowed slightly.

Despite the hype of renewables, it has not translated into a reduction in fossil fuels. The only time this has happened over the last 40 years was during the global recessions of 1980 and 2009.  By way of comparison, in 2009 fossil fuel consumption fell by 196 MTOE compared with an increase of 60 MTOE between 2013 and 2014.

Consumption is now 5 times higher than in 1965. From atmospheric CO2 measurements taken at Manu Loa since 1958, which have always shown an increasing trend, it is known that even 1965 levels were not sustainable in the long term.

The extreme emissions of today are happening when the sequestration ability of the planet has been heavily compromised due to the impact of past damage and global heating. As such, rapid rises of atmospheric CO2 are to be expected in the very short term.

Today’s increase is being driven and sustained by economic growth in the Asia Pacific region. 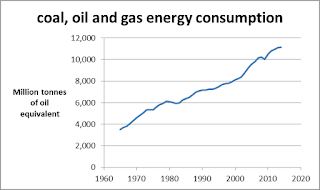 Following the extraordinary expansion of coal consumption from 2000 to 2010, it is now either plateauing or returning to the previous levels of growth of the 1970s. It is not possible to determine which, other than to observe that global coal consumption grew by 15 MTOE last year.

Much has been made recently of China’s reduction in coal consumption; however reductions in growth have been more than offset by rises in Indian coal consumption. If India follows the pattern of China, its coal consumption could rise considerably and rapidly and then take many years to reduce back to zero.

Despite progress being made in China on renewables, declining from the current level of coal consumption will take too long to avoid runaway climate change. 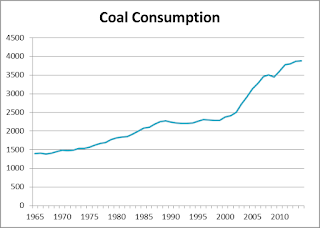 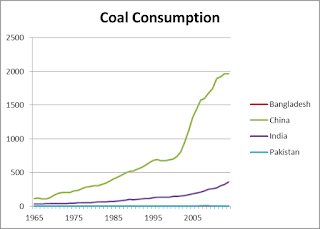 It is of note that Pakistan and Bangladesh coal consumption is not even visible on the chart, despite these nations once being part of India and having substantial populations.

Despite oil consumption declining in North America and Europe, it has risen in every other region of the world; in particular the Asian Pacific region. These rises have negated all the savings made in the developed world. 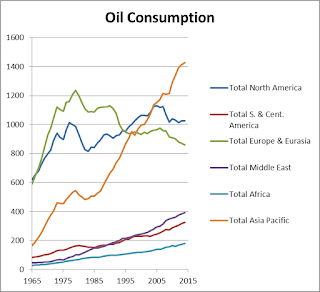 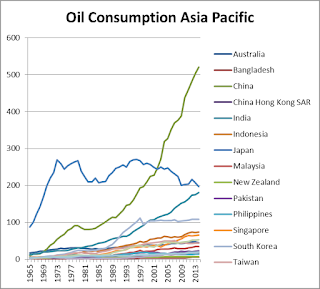 As with oil and coal, gas consumption has risen in all regions of the world, with the exception of Europe. 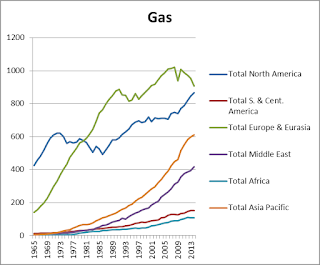 All developed nations are betting on an effective roll out of renewables as the primary basis of their climate change response at the COP talks. Despite the efforts over recent years, solar and wind still only produce 1.81% of the energy delivered by fossil fuels. 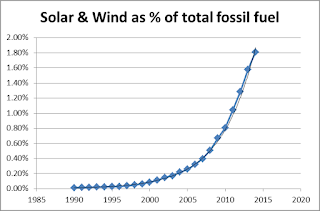 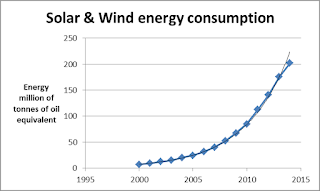 Most concerning is that the rate of increase has shown its first signs of slowing by quite clearly coming off the exponential trajectory that it was previously on.

This data provides a strong warning that the concept that renewables can be rapidly expanded globally to replace fossil fuels is potentially flawed and that it is already approaching its limits.

The other main source of renewables is hydro. Globally this has shown a steady increase which on break down is seen to be largely driven by China whose hydro consumption has risen to about 250 MTOE, or about 30% of the global total. This has been achieved by damming every river that drains the Tibetan plateau at much financial cost and with a corresponding increase in international tension with its neighbours.  The others area of growth has been South America with the construction of dams on the tributaries to the Amazon. Both of these energy sources are likely to be challenged as climate change melts the Tibetan ice sheets and disrupts Amazonian rainfall. Consequently, there is not much scope for further growth and even maintaining this level will is likely to be impossible in the long term.

It is of note that in hydro is currently generating about 4 times that of wind and solar and a global loss of this energy source could negate much of the gains from wind and solar. 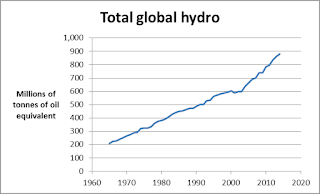 Posted by Kevin Lister at 12:20 PM No comments: