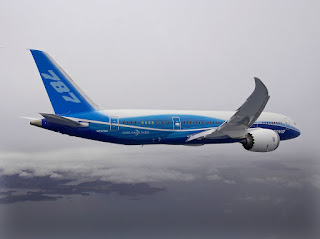 Subject: Is the B787 Dreamliner the end of the road for aviation?

Boeing’s B787 Dreamliner world tour has just finished its stop over in the UK. The media presented it as the next generation plane that would sweep aside the challenges of climate change with the latest new technology.  Nothing is further from the truth. The reality is that the B787 is a high risk and desperate last throw of the dice by an industry whose survival is inherently incompatible with the combined crises of climate change and peak oil.

As you wrestle with the concept of making aviation sustainable, it is important you fully understand how the limitations of aero-engineering drive the commercial risk exposure to unacceptable levels.

Similar data for the long range Boeing 777 is 350 seats, a fuel capacity of 181,283 litres, and a range of 17,000 km giving a fuel consumption of 0.0304 litres/passenger km. Using the same data for the A380 gives 0.032 litres/passenger km. Thus there is little if any measurable improvement between the B787 and previous generation planes such as the B777 and the A380 when taken on this basis.

The immediate question this raises is what has happened to the much-hyped efficiency improvements of the B787? The answer is simple. The B787 is smaller than the B777 and A380. As such, it loses economies of scale.  So the new technology simply allows a smaller plane to fly with the same seat efficiency of a larger one and with a more comfortable interior.

But this was the business strategy. Boeing wanted to get the efficiency and range of a larger plane on a smaller plane to exploit the potential of the point-to-point transport model. This would enable the aviation industry to circumvent the restrictions of the major hubs such as Heathrow and continue to grow through exploitation of regional airports.

This business model is hubris on a grand scale. It flies in the face of all the platitudes of the aviation industry about their newfound concern for the environment.  Flying thousands of B787s around the world in a point-to-point network is the most effective way to maximise carbon emissions and it ignores the economic realities of escalating fuel prices.

If the aviation industry were genuinely concerned about carbon emissions, it would have used the technology in the B787 to design slower planes.  By way of comparison, the Lockheed Constellation of the 1940’s had an efficiency of 0.0334 litres/passenger km. This is well within the margin for error for the Boeing 787. Its equivalent efficiency to today’s super modern planes was delivered by basic physics. This tells us that drag is proportional to the square of speed, power is proportional the cube of speed and if you want to fly further you have to use energy to carry the extra fuel.  So doubling the speed increases drag by a factor of four and the power consumption of the engines by a factor of eight, making an efficient plane one that flies slowly over short distances.

So the claims of Boeing and the aviation industry to have produced a revolutionary fuel-efficient plane are wrong. Their technology simply allows smaller planes to continue to fly fast and cover the long distances that only larger planes could previously manage.

More critically the development costs of the B787 are an industry record of $10billion. This gives the B787 the dubious distinction of having the lowest ever ratio between improvements over its predecessors to developments costs. It is another first associated with this plane, but one that Boeing’s marketing department keeps quiet. As such, the B787 brings aviation’s unsustainable trend of increasing development costs and diminishing returns to a critical apex.

The recent history of the A340 puts this risk into perspective. The A340 served long haul routes, but being larger than the 787 its fuel consumption of 0.031 litres/passenger km was comparable.  When oil prices rose in 2008 operators could not run it profitably as its breakeven load factor increased to 120%. This led to the plane being taken out of service and the A340 production line was shut down in 2010.

Similar developments are now being witnessed with other airlines. Qantas recently announced a delay to its A380 programme. This is largely driven by diminishing margins in the face of rising fuel costs and carbon taxes. The same economics will inevitably apply to other airlines and they will come to similar conclusions. Policy makers must realise that these events taken together are cause for serious alarm, especially as the A380 was billed as the world’s most efficient plane on its recent debut into commercial service.

The danger for Boeing is as the economics of the B787 are not significantly better than the A340 on a per seat basis the whole project is highly exposed to increases in fuel prices.  It will take only a modest increase in the price of oil to render the whole project none viable, and with it much of the aviation industry.

If this sounds implausible, then it is worth remembering that the B787 concept was developed in 2004 to allow growth in aviation to continue. It was not designed to help the industry consolidate in the face of rising fuel costs and environmental danger. The idea of whole classes of modern planes such as the A340 becoming redundant overnight was not even on the horizon.

These are fundamental issues no aviation minister can ignore. They determine future policy. Aviation growth cannot continue in the face of rising fuel costs, rising development costs and rising production costs. As such, the role of the aviation minister must be to chart the decline of the aviation industry in a way that can be done with the minimal amount of pain for those that are in the industry and those that depend on it.  The alternative is to ignore the evidence and wait for the industry to collapse suddenly and painfully and to take everyone else with it.

That is the point! But the 787 is touted as being some super green and fuel efficient leap forward by the aviation industry and its supporters in the press and in our political institutions.